CARSON and Cloudy with a Chance of Meatballs 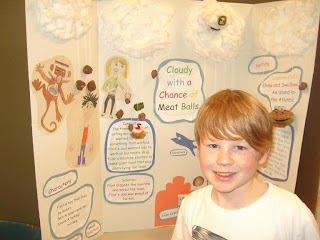 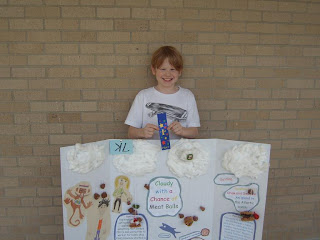 Carson entered the reading fair at his school. He read the chapter book Cloudy with a Chance of Meatballs. He was sooo excited to see the movie when it came out. Then he was required to make a poster describing his book.
He had great ideas and really enjoyed making his poster. Right away he knew he wanted to make meatballs out of cotton balls and hang them from cotton clouds. He was creative and thought of fun ideas. Carson made a hamburger out of pipe cleaners. He drew fantastic characters. I helped him a little with the hot glue gun.
Carson was all smiles when I picked him up from school the day of the fair. He told me he won. Earlier that day Easton had passed out and had a small seizure due to a bad reaction to the flu shot, so I was relieved to get the good news about him winning when Carson's teacher called. The school asked if we planned on continuing in the competition. I said of course. I knew Carson would be so happy.
Well the competition continued at a regional reading fair in Jackson MS ( 2 and half hours away) this past Friday. I took Carson, his poster, Ty and Bo to the competition. As soon as we walked in I knew we were way way out of our league. Lots of kids were in costumes to match their books and their posters were AMAZING! I could not believe it. I was worried Carson was going to feel bad. Judges came by while we waited for a couple of hours. We had a 2 hour break. When we came back Carson was so worried that we were going to miss the winners being read while we were in the bathroom. I honestly thought that it would be fine to miss hearing because I thought there was NO Way he was going to win.
Sure enough when it came to his Division they read 3rd place and 2nd place and then
CARSON SAINSBURY 1st place WINNER!!!!!!
I was shocked and so excited for Carson. He was thrilled! This means we are moving on to the State Competition in Jackson held in May. What a great Day for Carson! He chose a Shaun White shirt from Target for his prize. He loves those shirts! All the way home Carson and I just could not believe he won. Life is Fun!
Posted by sainsburys at 7:07 PM

That is so great. Hope he does well in his next competition.

That is so exciting! Who knew MS could be so much fun? (just kidding!) hahaha

What a stud!
We're so proud of you
Carson!!!

Way to go! That is awesome! I am sure you were such a proud parent.